In Depression: A Public Feeling (2012), Ann Cvetkovich seeks to think about depression as a socio-cultural phenomenon rather than a medical disease. Building upon her work on sensationalism and trauma, she depathologises the negative feelings associated with depression, so that they can be seen as a resource for political action and agency rather than its antithesis.1

Careful not to suggest that depression should be thought as a positive experience, Cvetkovich argues that retaining its associations with inertia and despair, depression becomes a site of transformation through publicity and community formation. In her own words, “[depression] is about hope and happiness, about how to live a better life by embracing rather than glossing over bad feelings… It asks how it might be possible to carry with the negative as part of daily practice, cultural production, and political activism”.2

In Favour of Feeling

Cvetkovich contextualises her work within the turn to affect, which she sites as not only making things such as emotions, feeling, and affects objects of scholarly inquiry, but also for new ways of doing criticism. Refusing a neat distinction between affect, emotion and feeling (as evident in the Deleuzian tradition of affect; see Shouse 2005), she approaches these terms as “keywords, points of departure for discussion rather than definition”.3

Favouring feeling above affect or emotion, Cvetkovich uses feeling in a generic sense because “it is intentionally imprecise, retaining the ambiguity between feelings as embodied sensations and feelings as psychic or cognitive experiences.” Furthermore, she acknowledges the “vernacular quality that lends itself to exploring feelings as something we come to know through experience and popular usage… a conception of mind and body as integrated”.4

Cvetkovich is critical of the affective turn for its disavowal that work around feelings has been happening for quite some time in feminist scholarship, especially in response to the mantra, “the personal is political.” Taking up what Lauren Berlant has called the “unfinished business of sentimentality,” Cvetkovich’s project on depression explores the connection between emotions and politics and how such connections craft new forms of feminist intellectual politics that are lacking in the public sphere. Within this, the personal voice has persisted as an important part of feminist scholarship and operates as a starting point for theoretical insight into the affective dimensions of ordinary life and provides more systemic accounts of power that have been central to cultural studies. Thus, her emphasis “on depression as ordinary represents an effort to describe the present through attention to the felt experience of everyday life, including moments that might seem utterly banal in comparison with the moments of shock or ordinary extraordinariness…”.5

In this regard, Cvetkovich’s project can be thought of as a new way of cultural studies that moves beyond critical (or paranoid) readings into more reparative modes of reading which are “open ended and flexible.”

She uses depression as an entry point in an attempt to engage how we might track affective life in all its complexity and in what kinds of representations might do justice to its social meanings. She says, “It’s important to let depression linger, to explore the feeling of remaining or resting in sadness without insisting that it be transformed or reconceived. But through an engagement with depression, this book also finds its way to forms of hope, creativity, and even spirituality that are intimately connected with experiences of despair, hopelessness, and being stuck.” 7 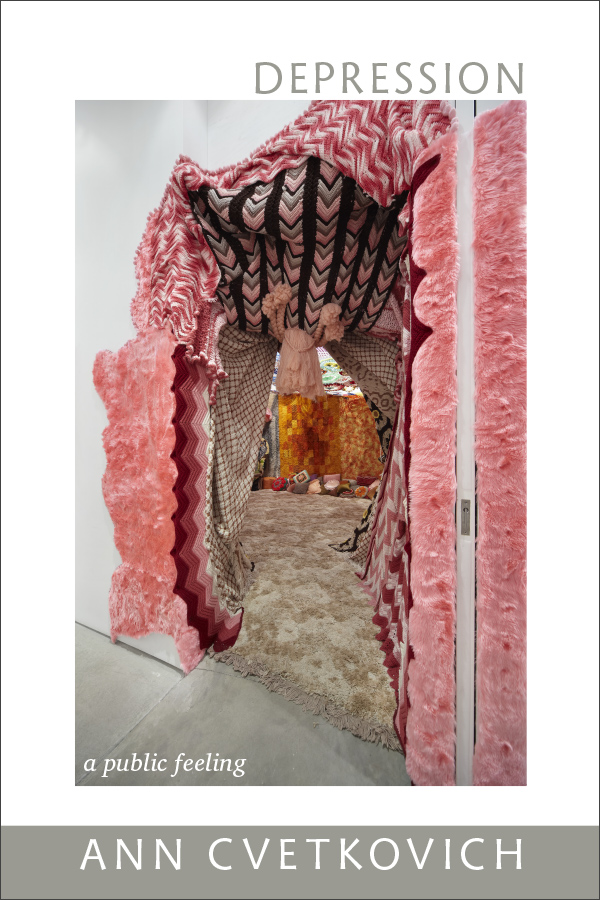