An Interview with Geert Lovink

An interview with one half of the We Are Not Sick Band: Geert Lovink (media theorist, net critic, activist and founder of the Institute of Network Cultures).

This past Saturday our Band of Burnouts research lab presented We Are Not Sick at Zurich’s annual contemporary music festival Lange Nacht. As part of the presentation, an accompanying publication was available onsite for guests including an interview with one-half of the We Are Not Sick duo, Geert Lovink.

Here is the conversation between Geert and myself. 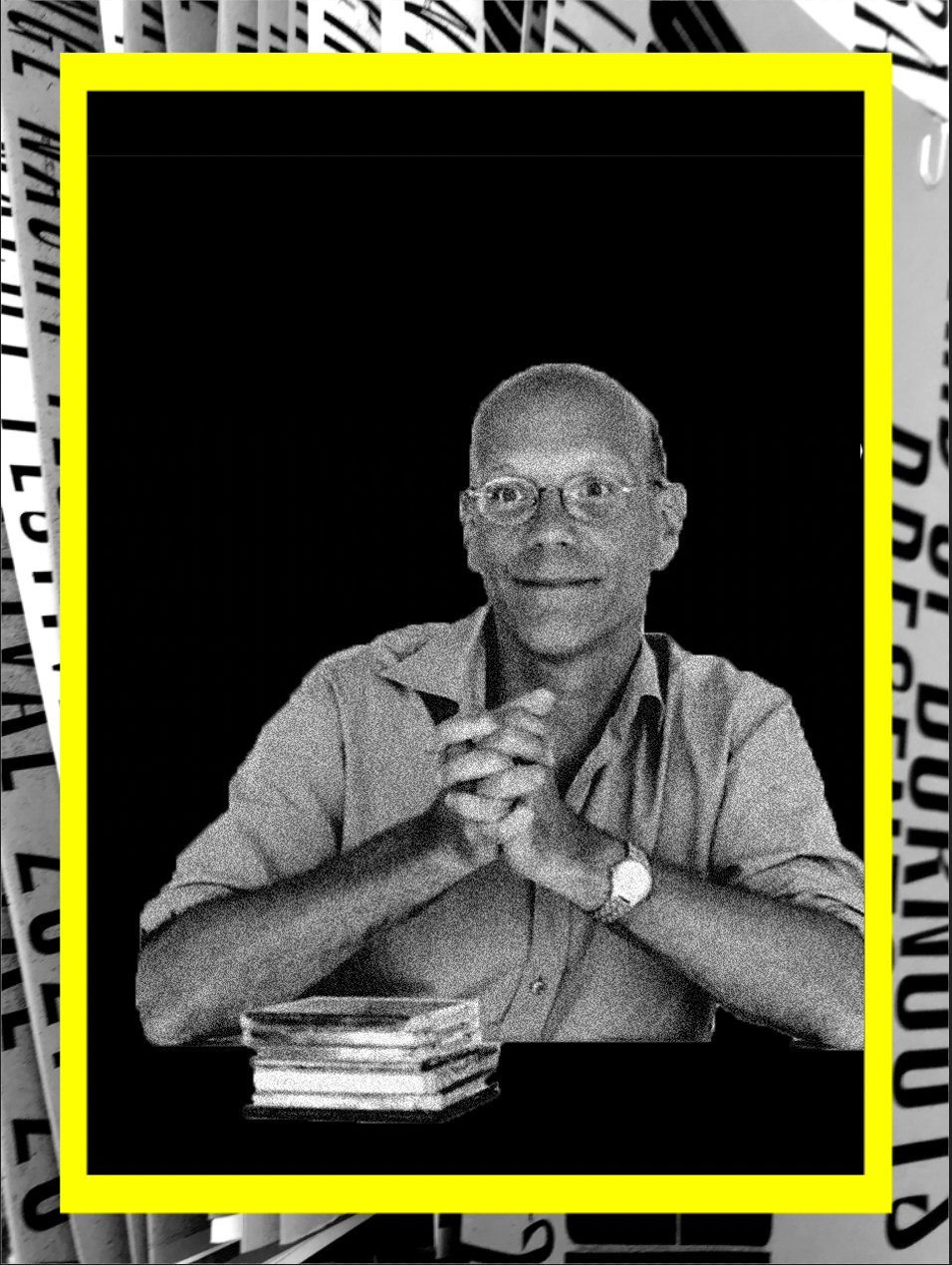 Jess Henderson: The band name We Are Not Sick is a clear statement. What is it a refusal of?

Geert Lovink: Stating that we are not sick is a refusal to see our smartphone and social media ‘addictions’ as own individual problems that can be ‘healed’ by corrective apps—designed by the same platforms that created the manipulative interfaces in the first place.

We should not feel guilty and internalize these problems. A digital detox weekend is not the solution. It might feel good to delete the Facebook, Instagram, and/or WhatsApp logos from your phone to install Telegram and Signal instead, but this should not be our aim.

Now, individual solutions like this are part of the problem. They defer from the urgency to come together, organize, strike, refuse, and bring the internet (in this case) to a hold. Platform monopolies should be dismantled not ‘regulated’. It is that simple. How do we get there? By realizing that it is not our mental mess that is at the centre of the universe, even though it feels that way. Collectively, we need to get out of the catch-22 situation that neoliberalism created for us: where the individual, confronted with the poverty of its techno-subjectivity, has to be both the starting point and the ultimate goal of every intervention that we (can) imagine.

Indeed, it is a catch-22. It’s also nothing new to take pleasure in something we are told is “bad for us.” I’m thinking about the rhetorics around ‘health’ vs. ‘sickness’, and how these things can be utilised for societal warfare—as Barbara Ehrenreich writes on the war on smoking:

Now it is said that ‘social media is the new smoking.’ Presumably, this means it is bad for our health. What are the problems with this analogy, and how does We Are Not Sick, the band, conceive of the notions of ‘health’ vs. ‘sickness’?

GL: Most French philosophers in the ‘postmodern’ category smoked and some of them even died of lung cancer. For them, Hannah Arendt for instance, and many others of that generation, the “pleasure of the text” was indeed intimately related to smoking. Like smoking, we are now seeing a new generation take the stage for whom both reading and writing is closely tied to social media and their smartphones.

Sure, likes and nicotine have certain similarities. I’d leave it up to the dissident neuroscientists and behavioural psychologists to explain the scientific details here. Please re-read Sadie Plant’s Writing on Drugs (1999). We all have our own preferences and pleasures, neurotic impulses and bad behaviours. I personally love to delegate smoking and social media to others: please do it for me. I miss it, yet I can’t do it. I have a Bartlebian “I’d prefer not to” attitude here, which I despise to promote.

The title of the band’s debut album is Sad by Design. Can you explain some of the critical thought and main themes that lie within the songs?

GL: There are similarities between this album and my first album with our Bilwet/Adikno collective called Electronic Solitude or Elektronische Einsamkeit that came out at the height of the dotcom boom in 1999, where I read aloud texts in German and English.

This time my collaboration with John Longwalker in We Are Not Sick resulted in the ‘Sad by Design’ album that was produced in the pre-Covid 2018-19 years—which had a similar frantic, pre-apocalyptic ‘roaring twenties’ feel.

As we know from previous epochs, the intense and depressed psycho-states of artists and other irregulars pre-empts the actual outbreak of the crisis, whether it is late 1929, mid-2000, or early 2020. In this case, it is all about social media anxiety. The waiting, the anticipation, the silence of the Other in an age of real-time exchanges. What does it mean when your ranking is low whilst you are, virtually, surrounded by influencers and other TikTok dancers? What is the long-term implication of the absence of undergrounds and subcultures, when literally all cultural expressions are commodified and set in gentrified urban environments? What is the impact of the real existing nihilism caused by state and platform surveillance? 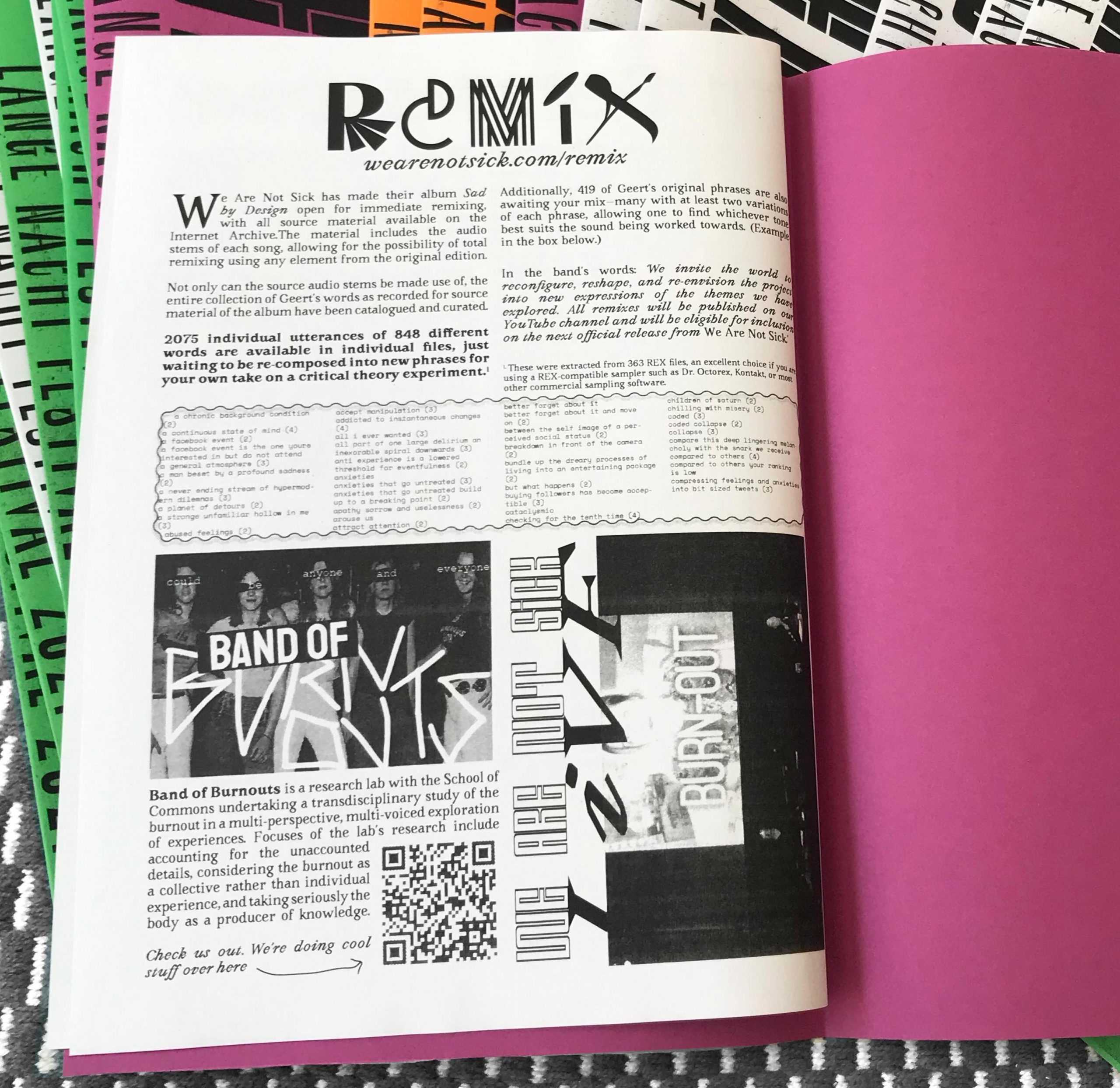 The band has made the whole album openly available for remix and you and John have said that you “want to provide the entire world with the opportunity to remix our album.” All the tracks, as well as hundreds of lines of text and thousands of individual words, are available and completely configurable to any interpretation. What was the motivation to put the album up for free remix and what would be your dream to see done with it?

GL: This idea grew out of John’s push controller for Ableton Live, an instrument where you pre-program buttons that light up. They are played like a square keyboard. For each button, you can allocate either a sample or a phrase, a slogan or a word, and thus one can recombine certain moods and phrases into a song, as well as scratch and repeat them whilst doing the same with the underlying music. In my 1980s world, this would be a reference to Laurie Anderson and William Burroughs, although there might be multiple musical theory performances that one could refer to that have used similar techniques in the past. The idea here would be to dance to the theory, which, in the case of rap, has been proven possible. The body no longer needs to be disciplined, sit still, and silently take in the complexity of the carefully crafted sentences that are packed with concepts and references, as is the case in reading a static text. Instead, theory tracks into meme-mode and acknowledges the contradictory, fragmented ways of life that we live. 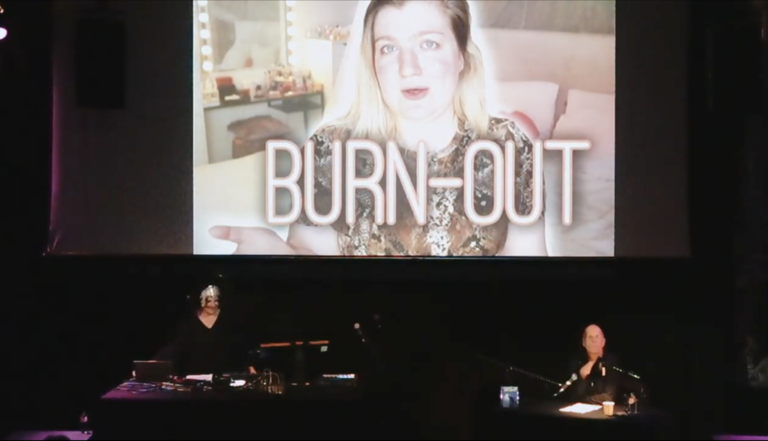 How do you see the relation between the “encroaching sadness provoked by social media architectures” that We Are Not Sick addresses and the phenomenon of burnout?

GL: The boundaries are blurry, I know, but we refrain from saying that everyone is suffering from depression, that everyone is sick, needs to see a doctor, receive medication, take time off to heal, etc. While I wish everyone could take time off to have a break and recover, I strongly believe in organization, uprisings and revolts, and fundamental change. I do not believe in the medicalization of everything.

We need other media architectures, other social networks, more relaxed ways to communicate, and not this hyperbolic pressure to stay available 24/7. Burnout is a serious condition that acts like a ‘sickness container’ in which a multitude of symptoms are blended into one very heavy feeling of no longer being to continue, a psycho-somatic breakdown that I won’t go into full detail over. I am most interested in its weaker variations that are sensed by billions in micro-doses, daily. As an internet critic, media theorist, and activist, what I can do is get a better understanding of the designed dialectics of extraction on the one hand, and exhaustion on the other. For some this leads to burnout, for others it leads to but a mere, mild form of resignation. In the end, precisely how the platform economy plays out should not bother us. What matters is how we respond, how we care, and how we organize.

Thank you to Raphael Belfiore, Micha Seidenberg, Leandro Gianini, and Marea Hildebrand for their help in making this event and intervention possible.